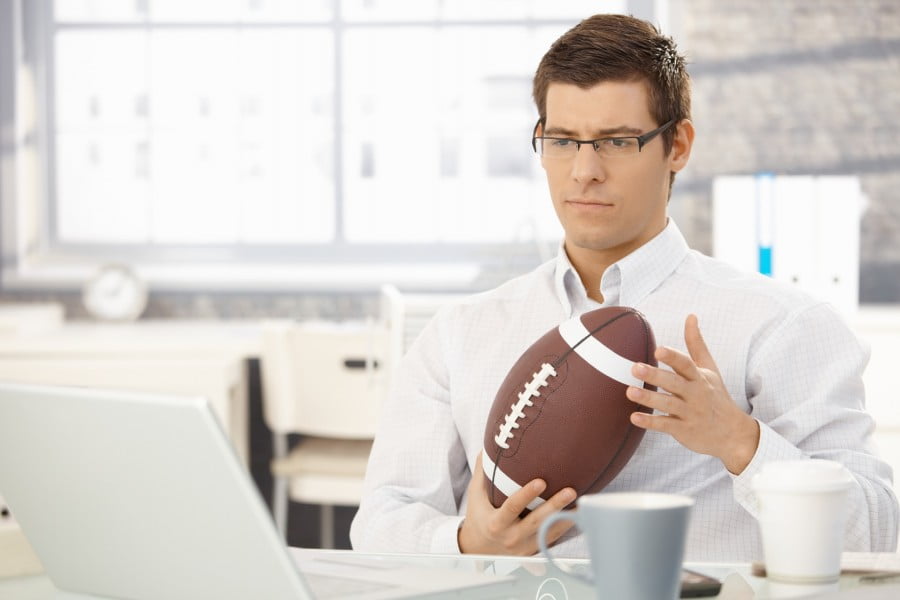 The Benefits Of Fantasy Football In The Workplace

I was reminded this morning, as my son asked his father about setting up the fantasy football league, that it’s nearly football season again. And as always, my personal life experiences (specifically with my kids) usually sparks a blog topic. I started thinking about the workplace and fantasy football. I’m sure in the minds of employers, fantasy football can be seen as a productivity killer. And I can see their point but I like to think about the flip side, the positive impact that it would have on the office. And while it’s hard to think of the office fantasy football league as a benefit – it could be a big one. Now before you shake your head in disagreement, hear me out.

I will admit that if you search the Internet you’ll find there’s no shortage of studies suggesting that workers are wasting more company time on the Internet, whether they’re playing games or placing eBay bids. Lately it seems fantasy sports, in particular fantasy football, has been flagged as the biggest employee time waster.

More than 33 million people in the United States are actively participating in fantasy sports, with approximately 14 million of those monitoring, picking up, trading, and gossiping online about their match-up on Sunday, according to the Fantasy Sports Trade Association, the largest and oldest trade group representing the fantasy sports industry.

Moreover, research conducted by outplacement consultants Challenger, Gray, and Christmas says employees will spend an average of 50 minutes a week playing fantasy football. And with the season stretching from September through December, Challenger says businesses stand to lose $1.1 billion per week and more than $18.7 billion over the NFL season.

Those are big numbers.

While many offices discourage fantasy sports leagues, a survey from Ipsos says, 40% of respondents believed fantasy sports participation is a good thing in the workplace, since it increases camaraderie among employees. One in five said their involvement enabled them to make a valuable business contact.

So, I say embrace it. Employers and employees need to manage their distractions daily, regardless of what is taking their attention away from the work at hand. If the company feels the need to set rules around fantasy leagues, then so be it. But here are the benefits of playing fantasy football at work, as I see it:

A Rise in Morale. Let’s face it; people love being involved with fantasy football, to be a part of something everyone else is – it’s great for morale. And if you haven’t outlawed other beloved social activities also widely believed to be time-wasters — like Facebook, Clash of Clans, etc. — then it’s probably worth it to let fantasy football slide, even if just to avoid the backlash you’d get from employees for banning it. Plus, when workers feel their employers trust them to do the right thing, they tend to do just that

Better Interdepartmental Communication. Fantasy football gives employees a reason to talk to other co-workers they may not ordinarily interact with. For example, a sales rep may be able to talk to the CEO because their teams are playing each other, or someone in the call center may approach the Marketing Director with a trade offer. It’s a catalyst for a level of communication some employees wouldn’t ordinarily have with each other.

Improved Customer Relations. It’s not out of the ordinary to see salespeople contact customers with whom they’ve had a long and prosperous business relationship, and invite them to join his or her fantasy league. It’s a great way to engage in customer contact.  Most die-hard fantasy players are in multiple leagues and are always looking for new entrants — and invites often aren’t limited to close family and friends.

Still not seeing the benefit of it? Consider this: Even if you outlaw the game, chances are employees will find a way to play it behind management’s back and lose productive man hours anyway (if you are in agreement that it’s sole purpose is to waste time). As a result, you may want to ask yourself if there is more of an upside in letting them play, potentially unlock the benefits listed above, than forcing them to hide their activities and gain nothing from it.